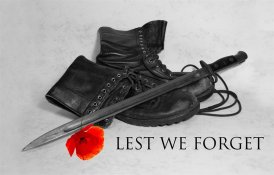 Almost every weekend without fail, I complain about going to work. I don my striped Matalan polo and trousers, pin ‘Adrian’ to my upper chest and leave the house with a deteriating sense of enthusiasm. Yet, as I got off of the bus yesterday, I was greeted by an ageing man in an old, ill-fitting WW1 uniform, shivering as he held a donation box to passers by, breathing into his tattered gloves for warmth, in desperate need of one of my Mum’s ‘magical hugs’. Was he miserable? Well, his ‘Cheshire Cat’ smile wasn’t helping his case – that, to me, is what Remembrance Day is all about.

We spend the entire year glorifying events as they pass through the calendar. At 18, I still have a memo on my phone titled ‘Christmas List’ where I write down my latest dreamboat gizmos that I may or may not need. Even Matalan themselves had Christmas stock months before Halloween started having a hype to it! Filled with Action Men and Avengers’ play sets, I ask myself – where are the cool action figures of WW1 soldiers in battle?

I think it’s a matter of respect that society understands that we don’t mass-commercialise this day of all days. You can walk past people who don’t say a word to you; but when you notice that poppy on their chest, you see the silent message that they’re showing to yourself and the world – to our soldiers, thank you. To my great granddad who passed away when I was little, thank you. To the gentleman freezing his hoo-has off outside Tesco’s near Matalan, thank you.

Let’s forget, just for one day, that games like Call of Duty exist – war isn’t something to be glorified. Instead, reflect on those that have helped build the world that we live in today – heck, go put a smile on your face as you go off to work, I know I will! As most of you know, I have a medical (hah) addiction to listening to Coldplay – I find listening to this song, reading the poem ‘In Flanders Fields’ and re-watching the ‘Remembrance Sunday’ service help to capture the spirit of this day – lest we forget 🙂